It’s already dark when Deivid drops the volunteers off on the side of the road and drives away. In fact, it’s pitch black, because we’re in the middle of the Atlantic Rainforest, and there are certainly no streetlights lining the sides of the dirt roads. The six of us laugh nervously, our faces partially visible in the moonlight. We’re waiting for a second ride that will bring us to Belisário, a community another thirty-minute drive away. We play a word game in the dark, and our nervous chuckles turn into full-bellied laughs. We’re good at finding entertainment. During my time in the forest I’ve found myself becoming more patient, more comfortable with the feeling of time on my hands.

After fifteen minutes we begin to wonder if we’ve been stranded. We’re very literally in the middle of nowhere. The air is full of buzzing insects; it’s always loud, and yet always quiet. Then the rumble of an engine breaks through the noise. “Hey there!” Robin calls out from the driver’s seat. “Hop in.”

During the drive, Robin and Binka tell us wild stories from their twenty years living in rural Brazil — tales of neighbor disputes, out-of-commission bridges, storms, and even murder. The dirt roads slowly turn into narrow paved streets as we arrive in Belisário. People watch us as we drive by. They sit on stoops with cups of coffee, watching silently. Shirtless potbellied men stand beneath awnings. Dogs sprawl on squares of sidewalk and regard us wearily as we pass.

I wonder if they gaze at every car that passed through the tiny village. Roads have only recently been introduced here. Our vehicle barrels around the rotary in the middle of town. We’re certainly not quiet; our vehicle is large, muddy, and has emerged from the depths of the rainforest.

We are an intriguing group, though, and that would probably be enough to stare, if they could see through the car windows. Robin looks straight out of an explorer movie, a Harrison Ford lookalike from Kenya with silver hair and callused hands. Beside him sits his wife Binka, a British concert-pianist-turned-investigative-journalist who speaks five languages. They must be in their 70s and yet they radiate energy and Binka’s hair looks effortlessly blonde. In the back: Riho, a middle-aged woman from Japan; me, Nya, and Ronja, three university-age students from the United States; and Nathan and Kerry from the UK.

We’ve come to Belisário to attend a very important town meeting. The town had recently banned mining, a huge win for conservationists and farmers alike. It was great news, Binka tells us. She and Robin had been helping them work against the mining for some time. But now the people have some big decisions to make, because mining has long been part of the economy in Belisário. They were looking at this as a sort of fresh start. This would be the first meeting of many hoping to determine: now what? 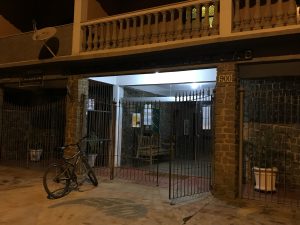 The entrance to the building where the meeting took place.

The building where the meeting is held doubles as both meeting hall and hotel. The hall has high ceilings, with an indoor second-floor balcony wrapping around the walls. There’s a large low stage on one end of the room, next to a wall made of large slabs of stone. We remark to each other on the magnificence of the space. It was a gift to the town, Binka tells us. 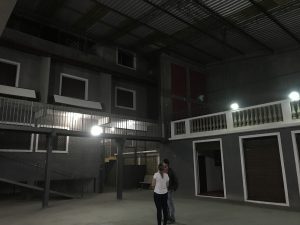 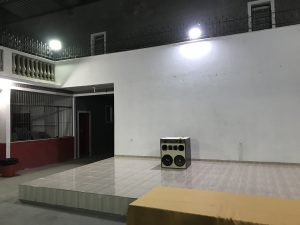 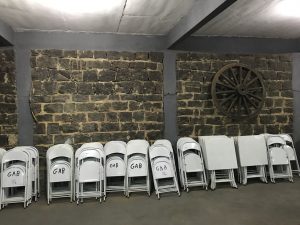 In the middle of the room is a circle of white folding chairs, a few rows wide, all facing each other. There are around 40 people here of all ages, including a few very young children with their mothers. Binka points out an eleven-year-old girl with long black hair to her waist: “That’s our Greta Thunberg. She gave a compelling anti-mining speech at the last meeting.” We cross the room and sit next to their Greta, who greets Binka familiarly without any shyness. People mill around and chat before the meeting is called to order. 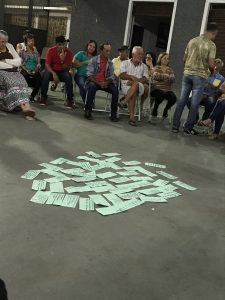 The meeting is being led by a Franciscan friar. He asks us all to stand, and everyone recites the Lord’s Prayer together before sitting back down. As the friar begins to speak, Binka turns slightly in her seat and translates in a whisper. The friar’s opening speech is unlike anything I’ve heard at a town meeting. His voice is gentle and earnest; he speaks like he’s giving a sermon.

The friar goes on for a while. He explains that this first meeting will act as a brainstorming session, and the second session will narrow down the ideas. “Today’s a day for listening, not for arguing,” he says firmly. “We want to give everyone a chance to talk.”

He passes out squares of paper around the room and asks each person to write the things that they love about Belisário. Nothing negative just yet, he reminds us, only the positives. We write so to not be influenced by other people speaking.

As everyone quietly writes, Binka tells us that the friar has his own parish, where he frequently preaches against mining. Two years ago a man with a gun demanded that he stop speaking out. He hasn’t traveled without a body guard ever since, but his civic involvement grew after that. The community mobilized around the friar in support, and now he’s leading their town meetings. It’s hard to imagine this well-spoken man being involved with any sort of violence or trouble, though I suppose that it was his facility at speaking that got him into the trouble.

One by one, the townspeople stand and read what they wrote on their paper. Once they finish reading their paper, they place it on the floor in the middle of the circle. An old man with white hair holds the paper close in front of his face and recites: “hospitable place with nice people, great climate, good quality of life, beautiful place, much better than before, since we’ve been planting trees.” He walks to the center of the circle while reading. “People are starting to understand what a privileged place we live in and are taking better care of it.” He puts his paper on the floor.

A balding man with glasses stands and reads, “we’re all friends and we don’t fight.” Binka’s face flickers with good humor, and I remember her stories about neighborly disputes during the drive.  There are many quarrels over property lines here, some of which have resulted in violence.

The people speak for a while about their waterfalls, churches, fertile soil, pigs, coffee, cultural events, natural beauty, and quality of life. One woman talks about how she goes out in town for 10 minutes and comes back 2 hours later because everyone is so friendly. The attendees range in age from their twenties to their eighties; some people have lived here for 60-plus years. Most of the older people are illiterate; the majority of people over the age of 35 have a third grade education. About half of the crowd are women, and Binka remarks to us that this is a big deal. Times have changed from even a few years ago. At one point, the eleven-year-old Greta stands and reads aloud her favorite parts of Belisário: “the people, quietness, and the strength to confront the mining.”

Almost everyone in the room speaks. The friar guides the meeting, keeping everyone on track.

“People who love things look after them,” he explains as the exercise wraps up. “I’ve been here nine years, and I see people appreciating what they have much more. When other people come and say how nice it is, the people living here begin to think, hm. People used to say other places when they were asked where they were from, but now they don’t.”

The friar devotes nearly an hour to this activity of appreciation. After they finish talking about the things they have, it’s time for the second part of the meeting: talking about the things they want. Another round of papers are passed out. More jotting down. “We’ll have future meeting to talk more about how to achieve what we want. Today is about listening, not solving. We’re not going to argue. Who is going to start?”

There are many things that they want, and many complaints. They talk about their politicians, health measures, public safety, erosion, and organization of the farmers. “Lots of motor bikes are poorly behaved,” calls out one man, accompanied by much laughter. There are no medical specialists in Belisário, only general doctors, so families have to drive a long way for those services. The preschool is in bad condition. There aren’t many policemen. One man suggests that they learn more about alternative medicines, many of which can be found right in the forest but aren’t currently used. A girl in her teens voices a need for public safety for girls who walk around at night. A man, to great applause, hollers that “our city counselors are paid but they don’t show up to public meetings; we shouldn’t elect them anymore!”

The friar has to remind people a few times not to be too negative or not to try to solve the problems. This is a brainstorming session. Everyone gets to voice their concerns. They’ll solve them at the meetings to come.

Towards the end, I ask Binka if she can ask the young girl to retrieve her papers from the circle so I might take a photo of them. I learn that the young Greta is named Claudiane. She’s amused by my request, but I was really moved by her list of demands for the town. She had six of them, ranging from education reform to better health to tourism. She was the most civically engaged eleven-year-old I had ever met. 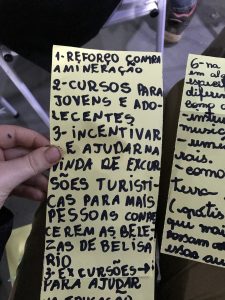 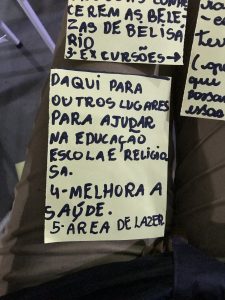 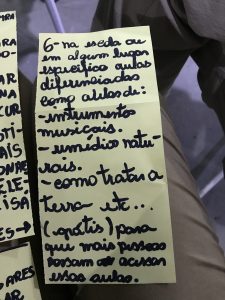 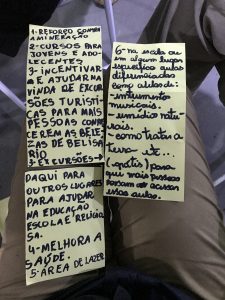 After the meeting is over, she speaks excitedly in rapid Portuguese to Binka, and within five minutes, Claudiane has determined that the six of us volunteers will come visit her school the following week to teach English. Claudiane and her friend giggle as they attempt to speak to me despite my limited Portuguese. The friend repeats herself a few times before I ask Binka desperately to translate for me. “She says you’re good at Portuguese,” Binka laughs. “Obrigada,” I tell the girl, grinning. Thank you. That was about my limit.

It’s a week night. People begin shuffling out around 9 pm, but a woman grabs us and offers us a tour of the hotel and the informational exhibit. By the time we’re piling back into the car, it’s late. We head back into the forest, and I think about the pride that these people have for their little town. I think about how infrequently we’re given a space to sit and talk collectively about what we’re grateful for in our lives and what we love about our community. It’s important to remember that the effort we put into improving our communities comes from our love for them, not our disdain of them. 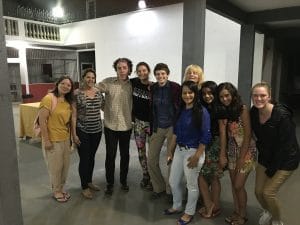 The volunteers with some local townspeople. Binka is in the back slightly right of the middle with the shock of blonde hair, and Claudiane is the third person from the right.