When I was sixteen, my dad bought me a book for Christmas called Anna and the French Kiss.

“Dadddd,” I groaned. My name, paired with French kissing, on the cover of a book, given to me by my dad. How embarrassing.

But also, sweet. My dad had been raising me without my mom since she passed when I was thirteen. Even without crippling grief, thirteen is a pretty tough age for a girl — and her parents, who have to deal with the onset of hormonal chaos and teenage angst. My dad and I didn’t talk explicitly about boys or periods. We avoided these subjects with care, gingerly sidestepping the awkwardness of trying to talk about something we both didn’t know how to talk about. My dad made sure I had other female role models I could go to — and that he could go to, too, as he frequently referred to them whenever I asked him something out of his area of expertise. And we interacted in this zone with subtle gestures. He would buy me pads at the store if I requested them. He attempted to buy stylish jewelry or clothing for my birthday. And a few times, for Christmas, he bought me well-reviewed YA books that discussed teenage relationships. How to Hook a Hottie was one. Anna and the French Kiss was another. 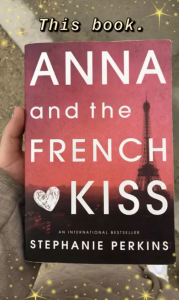 Luckily, cheesy YA romance novels are a guilty pleasure of mine. I read my namesake book several times over. It’s written in a realistic and relatable way, yet it has all that fairytale gush one desires. Plus it’s set in Paris.

I recently traveled to Paris for my first time with my friend Kayleigh, so, of course, I reread Anna and the French Kiss in preparation for the trip. We were only there for three days, but we dedicated one afternoon to traveling all around the city to visit some of the main locations inthe book. Even though characters aren’t real people, in the living sense, I love visiting places where somehow they’ve been, regardless. In Luxembourg Gardens, for instance, Marius sees Cosette for the first time in Les Mis. Just picture Marius, walking down the paths in the gardens, passing by the beautiful Cosette and her father Jean Valjean… Imagine it actually happening.

This book is right up there for me with the movie A Christmas Kiss and Taylor Swift’s first two albums as sources of enjoyment and comfort. I gush about it occasionally and have found that many of my college friends have also read and loved this book. Based on that, I’m guessing there’s a small niche fan group out there who celebrate this book. For these people, I have put together a very serious literary tour of Anna and the French Kiss. I’ve ordered the locations here in terms of chronological introduction in the book, in case you’re inclined to live out Anna’s story accurately. I’ll also list them below based on their geographical distance if you want to follow the most practical route. Enjoy. And thanks, Dad, for my first introduction to Paris, and for teaching me that storytelling is life is storytelling.

The book is largely set at Anna’s fictional boarding school, the School of America in Paris (SOAP), which is situated somewhere in the “Latin Quarter, or the fifth arrondissement.” Anna has never traveled outside of the States before going to Paris and so she’s reluctant to explore the city. St. Clair finally convinces her to explore with him one night.

The Latin Quarter is also the area of the city which contains most of the next stops.

On page 81, St. Clair explains the origin of its name:

“‘Centuries ago, the students at La Sorbonne — it was back there.’ He gestures with his hand. ‘It’s one of the oldest universities in the world. Anyways, the students were taught in, and spoke to each other in Latin. And the name stuck.’

A moment of reserve. ‘That was it? The whole story?’

Located very close to the Pantheon, our characters frequently walk past Étienne St. Clair’s namesake church. This is where we learn more about St. Clair’s childhood and relationship with his mother. (It’s also beautiful inside.) 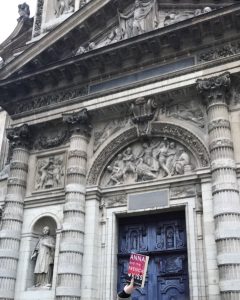 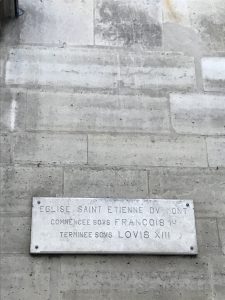 During their first exploration of the city, St. Clair takes Anna to this spot near the Notre-Dame Cathedral. “Point Zero” is the spot from which all distances in Paris are measured for the roads of France. It is, supposedly, the exact center of Paris, with POINT ZÉRO DES ROUTES DE FRANCE inscribed in the stone around a bronze star. 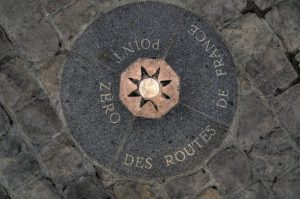 According to St. Clair, superstition says that if you make a wish on the star, it’ll come true. OR, “anyone who stands here is destined to return to Paris someday” (pg 86).

I was unable to locate one, but I will include in hopes that you can find it. That same night, on their way back to SOAP from Notre-Dame, Anna and St. Clair stop at a sandwich stand for “a late-night snack. The yeasty smell is mouthwatering, and my stomach growls in anticipation. We order panini, sandwiches pressed flat on a hot grill” (pg 87).

Not an important part of the story, but on page 95, Anna completes both of these tourist destinations with her friend Mer, since St. Clair is afraid of heights. 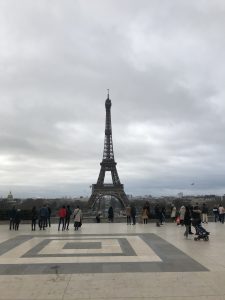 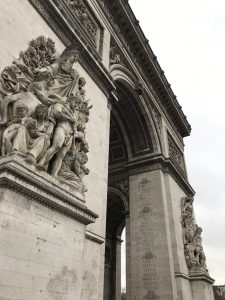 As far as I can tell, this is the same movie theatre where Anna, St. Clair, and their friends Mer, Josh, and Rashmi go to see It Happened One Night:

“‘Wanna go to the movies? They’re showing It Happened One Night at Le Champo,’” Anna says to her friend Rashmi. (pg 97)

When you reach the cinema on rue des Écoles, you’ll see “an Art Deco font, burning into the night” which “announces our arrival at the CINEMA LE CHAMPO… We follow blue rope lights down the aisle of the theater. I wonder if they’re blue everywhere here, rather than the golden glow of American cinemas. My heart beats faster. Everything else is the same.” (pg 104-105) 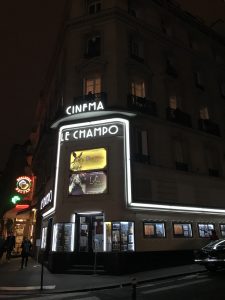 If you want to fully relive Anna’s experience, sit four rows up from the center. 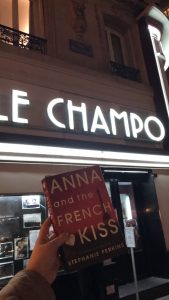 Anna revisits this theater several times. It returns again when Anna and St. Clair watch Roman Holiday and refer to it as Mom and Pop Basset Hound Theater (pg 265). The man who runs “that theater on rue des Écoles, the little one with the red-and-white lights,” (pg 159) has a basset hound named Pouce, who, unfortunately, seems to be invented. Anna also sees her favorite Sofia Coppola movie here, Lost in Translation, towards the end of the book (pg 346). Translation — and the miscommunication that results from flawed translation — is a theme in the book.

The largest cemetery in Paris, and home of the tombs of Jim Morrison and Victor Noir. Anna and her friends come here on Halloween for a picnic. Anna describes the cemetery as “a quieter city than Paris, but no less impressive” (pg 128). This location is where we get introduced to the first conflict in the book, one that affects St. Clair and his relationship with his friends. 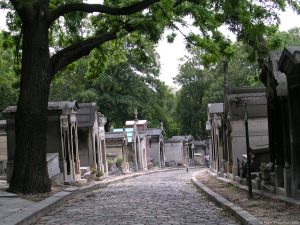 The Panthéon has alternated between a religious and secular landmark for a couple centuries, finally ending up as the crypt for dead famous writers. During Thanksgiving break, most of the SOAP students return to their families in America. St. Clair and Anna are the only two of their friends left in Paris, so they spend a few days together walking around the city. This is their first stop. 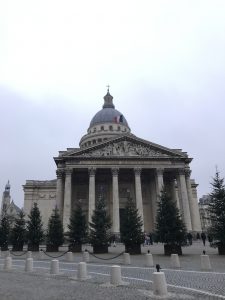 ‘The Hunchback of Notre-Dame guy?’

Here, Anna tries to distract St. Clair from a personal issue in his life, and they end up confronting his fear of heights, too.

If you want to mimic Anna and St. Clair’s movements, sit on the bench near the memorial for Antoine de Saint-Exupéry, who wrote The Little Prince. Also, sit on the steps of the Panthéon. Something monumental happens there on page 252! 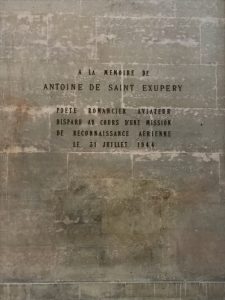 Stop #9 – Walking along the Seine

It’s not really a specific location, but make sure that you walk alongside the Seine for some time. It’s a wide impressive river right in the heart of the city.

In the book, it’s also a place of catharsis for St. Clair. “We spend the rest of dinner talking his mother. And when we leave the restaurant, we keep talking about her. We walk along the Seine. The moon is full and the lamps are on, and he talks until it’s as if he weighs an entire person lighter.” (pg 174) 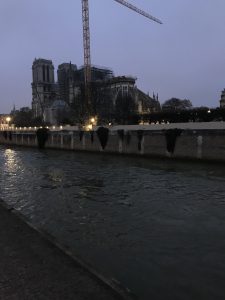 Notre-Dame Cathedral in the distance.

Ok, this place is just cool. Did you know that this book store was responsible for publishing James Joyce’s then-rejected, now-praised Ulysses? It was also a spot that many famous American expat writers frequented, including Ernest Hemingway and Ezra Pound. Also, the bookstore was founded by a woman, Sylvia Beach, in 1919. Cool. 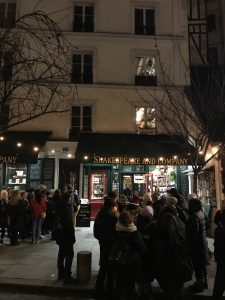 Anna and St. Clair come here during their Thanksgiving break together, when “it starts drizzling [and] we pop into a bookshop across from Notre-Dame…. Here books totter in wobbly stacks, fall from the seats of chairs, and spill from sagging shelves.” (pg 183).

St. Clair buys Anna a book – Pablo Neruda’s love poems. See if you can find it in the store. If you buy a book, they’ll stamp it, like they do Anna’s book: SHAKESPEARE AND COMPANY, Kilometer Zero Paris.

Where Cosette and Marius in Les Mis first met. More importantly, where Anna and St. Clair share a key afternoon together.

“Le Jardin du Luxembourg, the Luxembourg Gardens, is busy today, but it’s a pleasant crowd. Everyone is happy because it’s the first warm day of the year… So far Étienne has shown me a beekeeping school, an orchard, a puppet theater, a carousel, and a courtyard of gentlemen lost in boules, lawn bowling. He says we’re in the best park in all of Paris, but I think it’s the best park in the world” (pg 308-9).

To follow in Anna and St. Clair’s footsteps, sit by the Grand Bassin, which is an octagonal pool popular for sailing little boats. 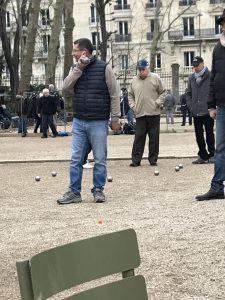 Above: lawn bowling in action.

For the super fans, Anna stops here to buy hair bleach on page 347, which is symbolic of her coming of age. She then bumps into St. Clair and his father, and some climactic exchanges occur. 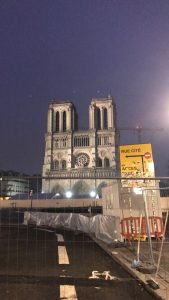 Without spoiling anything, the highest point of Notre Dame comes in hot at the end of the book (pg 360). Lots of themes tied together here, at the top of Paris. Keep an eye out for the chimera, which is the correct term for the things that people mistakenly call gargoyles.

Currently under construction – recovering from the fire, and in good hands.