Two years ago today, I flew to Copenhagen to meet my new family and home for the next four months. I remember the date because it was burned into my mind. I was very nervous about the people I would live with. I had filled out a housing form a few months earlier, in which I listed some of my preferences: Homestay? Yes. Another study abroad student at the homestay? Yes please. Pets? Absolutely. Size of the family? I can’t remember if I said small or large. It worked out perfectly, regardless, because my nuclear host family consisted of Marianne, Claus, and Marianne’s mother Mormor, who lives in a small house in the backyard. But Marianne and Claus have three kids, two kids-in-law, grandkids, siblings, cousins, etc, and their doors were always open. It was quiet on weekday nights, just the five of us gathered at the kitchen table for dinner. But Friday nights were wild, with eleven or more guests in the dining room, music, dancing, laughing. And the kids showed up frequently throughout the week for a trip to the zoo or to help my roommate Kayleigh and I dye our hair with the cheap hair dye we bought in the convenience store by the train station.

When I arrived in my proxy hometown, I was amazed at the beauty of Ishøj, as well as its similarities to my own hometown back in Massachusetts. A street away from the house, a large field turns into a marsh which turns into a lake. Two bridges meander over the water, and a five-minute bike ride leads you right to the ocean.

By February, I had started to settle into a rhythm. Like New England, winter in Denmark means darkness before 8 am. So in the mornings, I made pølser and remoulade sandwiches in the darkened kitchen, sliding around quietly in my socks even though Marianne and Claus were already at work. I packed up my sandwiches and buttered a piece of toast which I ate while biking to the train station in the misty darkness. Marianne had witnessed a fatal bike accident a few years ago and insisted that we wear helmets, though Kayleigh usually “forgot” hers. I quite liked attaching my bulbous white helmet to my backpack and feeling it clatter against my leg all day. It made me feel Danish. “Oh, do you bike then?” my professor once asked, gesturing towards my helmet. “Why,” I said proudly. “Yes, I do.”

Around 4 pm, after a full day of class, I would start the 40-minute trek home on my own. I loved that part of my day because it also made me feel like a local, part of the daily commute, making my way on back home in the suburbs. I walked home along Nørregade, past the huge church Vor Frue Kirke that has a flat top instead of a steeple because, according to Claus, in an old war the British could see the steeple from the harbor and they kept hitting it with cannonballs. I walked past the massage place forever offering a couple’s special. The big Irish pub already advertising in January for St. Patrick’s Day. A small knick-knack shop with little glass animals that I’d stop to look at. Then I’d emerge from the narrow, shop-lined street into a wide open plaza. Ahead and to the right, the entrance to the S-tøg, the train that would take me home. But I always looked to the left first. That’s where I could see an unobstructed view of the sky. It was darkening and grey by 4 pm. It would be a couple months before I ever saw the Danish sun, but I checked each day in case. Then I hopped on the train, biked home, and entered the house with a whoosh of cold air to meet good smells. “Hej hej!” I’d call out. Donna the dog would come to greet me. Dinner was ready. I gave my host grandma Mormor a hug. It felt as if we had been doing this our whole lives, me entering the house with a whoosh of cold air and them coming out to greet me and us all sitting down to dinner.

It has been two years, and Donna has died. Kayleigh and I both graduated college in the spring, and she moved to Indiana for a job. In Denmark, three more grandchildren were born – all girls. Marianne and Claus renovated both bathrooms and got an espresso machine. They kept us updated with photos and videos on Snapchat. Their lives went on without us, just as they had before we had come. They welcomed more host students. All together, the exclusive Koch family host student group had expanded to seven. Still, they missed us. Please come visit any time. 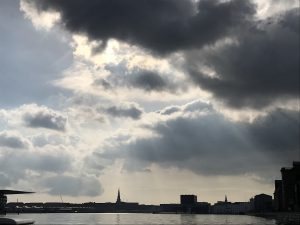 Two years, and we had finally made good on our word, and we were back. Our old rooms were clean and ready for us. There was a white orchid in a pot in my window, just like before. I knew it was a new orchid because I had killed the one that was there during my stay. I had trouble finding things in the fridge. I expected Ishøj and Denmark to fall back into my hands easily, like molded clay I had put down and picked back up, with my finger imprints already in it.

During our 10-day trip to Denmark, Kayleigh and I visited Copenhagen twice. We walked down our old school street Vestergade and I saw the bagel shop where once a man in a full business suit lay on the ground to reach a coin I had dropped under the counter. I looked for the bar where I had accidentally ordered a drink that cost $35; it was gone. The Chinese food takeout stand was still there. One of my old classrooms was next door to a strip club that displayed a large poster of a mostly naked woman, who had changed into a different mostly naked woman. In the afternoon, Kayleigh and I parted ways for a while. When it was time to go home, I decided to walk back to the train station on my old route down Nørregade, past the church and the Irish pub and the knick-knack shop.

How odd it is for a place to still feel like home, to still feel familiar, and yet no longer feel like it belongs to you anymore. Now that I didn’t live here, I felt reduced to a tourist, a visitor passing through. I felt simultaneously close and distant to these streets and corners that I had once loved and yet no longer walked each day. Perhaps it was because they didn’t recognize me anymore. It wasn’t that I couldn’t recognize them, but that they no longer knew me.

On my last night in Denmark, I visit Tivoli with my former host parents, Marianne and Claus Koch, and my friend Kayleigh. Tivoli might be described as an amusement park or shopping market or garden because it has all of these things. It reminds me of Disney world. The rides aren’t metal and garish; they’re beautiful, themed, quaint. One of the world’s oldest roller coasters, made of wood, flies up and down a snow-covered mountain the size of a two-story building. You walk a few steps farther and you’re crossing a winding bridge over a small body of water. A Japanese pagoda glows in the dark on one side; a life-sized pirate ship rests on the other. Sculpture swans rest atop the water. You walk by a kissing booth. It’s Christmas, so there’s a giant Christmas tree draped in Swarovski crystals, of course, sitting in front of a faux palace. Vendors sell hot chocolate and mittens and ornaments. Claus buys mulled wine. We warm our hands over a can of burning embers. I don’t yet think much about having children, but two years ago, Tivoli was the first place that I thought, in a thought so clear it was if I had said it aloud, “I want to bring my kids here someday.” 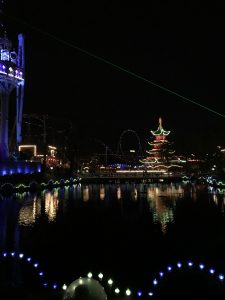 Two years now, and Marianne, Claus, Kayleigh, and I are right back where we started: family. I see our two-year-old ghosts sitting by the food truck eating pølser. And I stand in this strange but increasingly comfortable place, with the past running to catch up with the present, feeling my life in Denmark seep back into my blood after having forgotten what it felt like. We all take many different ships going where we’re going. It was nice to be back on this one. 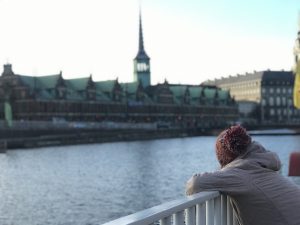