In the days leading up to Halloween last week, the Americans decided to celebrate – the Americans being me, Ronja (from California), and Nya (from North Carolina). The other three volunteers were from the UK and Japan.  But everyone, especially the Brazilian staff at Iracambi, was excited at the prospect of a party. I get the sense that Brazilians are good at festas.

So on the afternoon of Halloween, we rode the school bus to the nearest town, Rosário da Limeira, to buy what we needed: a pumpkin and candy. And, of course, some cachaça, a common Brazilian alcohol – 80 proof – made of sugar cane. A 500 mL bottle only cost R$3, or US $0.75. We found a green pumpkin and some taffy-like doces. At lunch, it began to pour, and we waited in the restaurant for half an hour watching the gusts of wind knock signs off buildings and push a flood of water down the street. 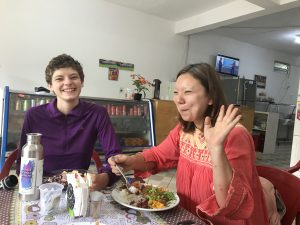 Lunch in Rosário da Limeira, before the storm

That evening, Nathan carved the Iracambi logo – a hummingbird with a drop of water slipping from its beak – into our pumpkin. We put the candy into a big bowl and went up to the cabin to throw together costumes. A new volunteer from Switzerland, Alex, worked on building a bonfire. Though we didn’t have much to work with, the challenge made costume-planning all the more fun. Kerry dressed as a cat, Nathan as Steve Irwin, Riho as a latte, Nya as a leaf-nosed bat. We rubbed mud all over Ronja to turn her into one of the scariest costumes: “erosion.” Virgilio dressed as “the man with the sack,” a legendary man from Brazilian scary stories who catches children in his sack. I became a beija-flor, which directly translates to kiss-flower but means hummingbird in Portuguese: I wore a flowery jumpsuit and Kerry covered my cheeks in red-lipstick kisses. 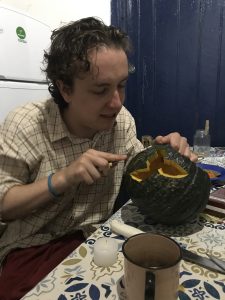 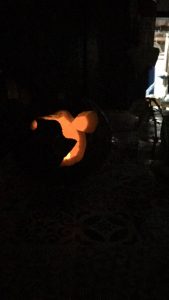 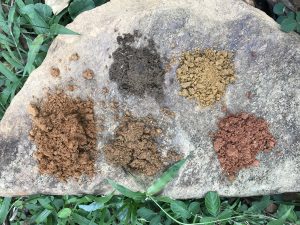 The colors of clay for Ronja’s erosion costume

Meanwhile, Rogéria and Virgilio, our resident Brazilians, were hard at work in the kitchen concocting caipirinhas, a mixed drink made with cachaça. They prepared it in two plastic jars, which we passed around the bonfire to a musical mix of Brazilian funk and American pop. 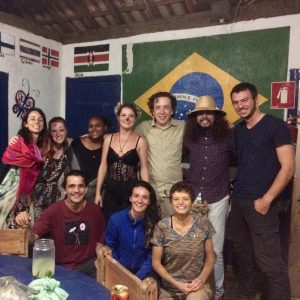 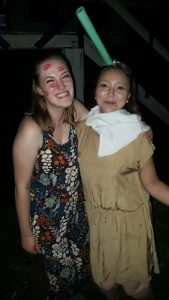 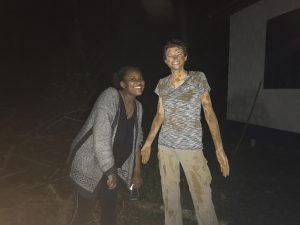 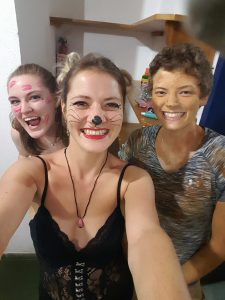 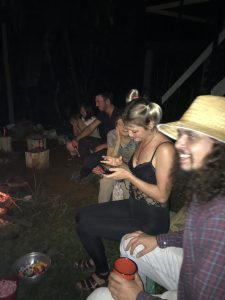 Halloween has always been an oddly sentimental holiday for me because of my mom. In early October, we would take out a huge box of autumn, Halloween, and Thanksgiving decorations from the basement. Glass pumpkins, jack o’lantern candles, and window clings of turkeys and bats decorated the windows. We filled bags with leaves and draped them in the trees like ghosts. And then there was the costume: hours of work together creating the perfect outfit. When I was a tiger, my mom bought squares of patterned cloth and used her sewing machine to make me a shirt. One year I was a rain storm (pillow fluff hat, hand-sewn white robe with silver ribbons, cardboard lightning bolt); another year a princess warrior (we dyed a dress green in the bathtub, made a knife and scabbard out of cardboard, and decorated a red robe with my great-grandmother’s ruby broaches). But our best costume was my Mother Nature costume in sixth grade. I wore a blue robe absolutely covered in small animals and leaves that my mom got from the craft store and glued on one by one. I won the best costume at school two years in a row.

My mom made all holidays special, and Halloween was no exception. After she passed, Halloween became a challenging day for me. I was 13 at the time, so my first year without my co-costume designer coincided with the beginning of that awkward time where you are slightly too old to dress up. I didn’t want to change our traditions. But the dynamics of our family had changed, I had changed, everything had changed.

This Halloween, I went to bed thinking about these friends I have made and I woke up thinking about my mom. Years later and half a world away, I had found the spirit that my mom and I had created, and that we had loved together.

Speaking of friends and traditions and special days, this past Tuesday was also my 23rd birthday. I had originally wanted to schedule my trip so that I could be home in time for my birthday, before realizing this was silly indeed because it would have cut my trip a week short for very little reason. But birthdays make one wish for home, family, and friends. Those things were all at home, I thought. But I didn’t consider that I might find those things in the Atlantic Rainforest, too.

On Tuesday morning, I made it to breakfast at 8:58 am – two minutes before breakfast ends. It has been my goal to make it to breakfast every morning (8-9 am), and I have almost accomplished it, though I also learned how to push it to the limit. I always eat alone because everyone else has already eaten, but at least I started my day with the birds and a piece of Larissa’s bread with cheese.

This time when I turned the corner into the small Restaurant Beija-Flor two minutes before it closed, all the volunteers were waiting there. They sang happy birthday to me, and they gave me a card they had all signed. Maria, the newest volunteer from Germany, gave me a small bouquet of flowers that she picked.

In the afternoon, we all walked up to Carminha’s, a cafe nearby, to buy cakes. It was a beautiful walk with views of the Graminha peak, which looks like the profile of a face. Unfortunately, Carminha was out of cakes; but there were two puppies there, which that was a wonderful surprise. 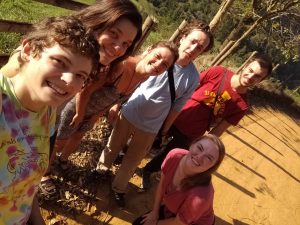 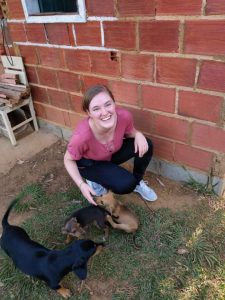 Trip to Carminha’s on my birthday with Ronja, Maria, Kerry, Nathan, and Alex (and puppies)

After dinner, we all gathered in the center and drank juice that Ronja and I had made that afternoon out of a pineapple, lemons from a tree I had picked last week, store-bought mango powder (the mangoes aren’t quite ripe yet!), and homemade rapadura (brown sugar). We sang happy birthday in all of our languages – Spanish, German, French, Portuguese, and English. Then we played cards, and I finally won.

I wasn’t looking for friends when I embarked on this adventure. I was worried about almost everything – the language difference, spiders, catching my buses, mosquitoes, what if the nonprofit wasn’t even real and I was dropped off in the middle of nowhere. But I hadn’t given much thought to the other people that would be here with me. There were other bigger things to worry about than the possibility of creating close friendships.

I guess I got lucky.

Last couple days in Brazil, and then heading home soon! Time flew. A few more pictures with the crew: 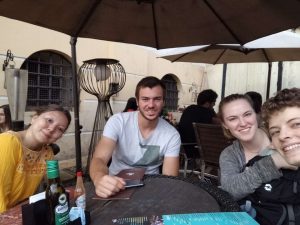 At a cafe in Ouro Preto 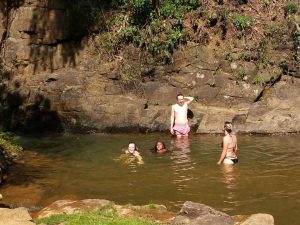 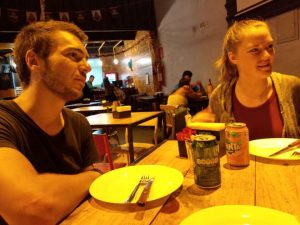 Alex and me at a German-themed pizza restaurant 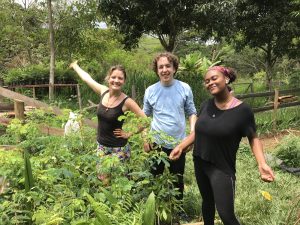 Kerry, Nathan, and Nya in the nursery 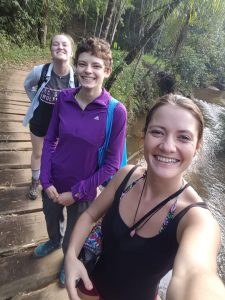 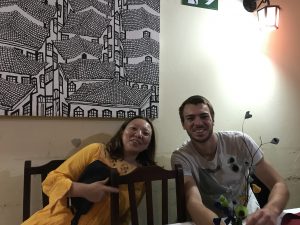 Riho and Alex at lunch in Ouro Preto 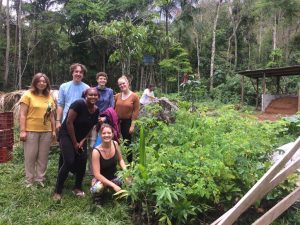 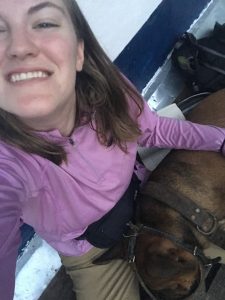 Me and my dog buddy Thor