This was my second – and last – weekend in Brazil. I spent it in a small city called Ouro Preto, which translates to Black Gold. 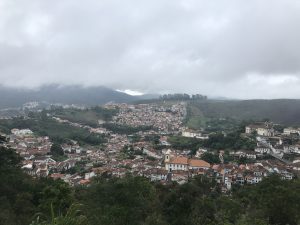 I traveled to the city with three of the other volunteers – Ronja, Riho, and a new volunteer from Switzerland named Alex. Luckily, one of the Iracambi coordinators Deivid has lots of contacts, so he set us up with a taxi and a place to stay in Ouro Preto for two nights. And that was about all that we knew before setting off on the four-hour car ride at 2 pm on Friday.

Ouro Preto is built into the side of a mountain. In 1980, it was designated as a UNESCO World Heritage site because of its baroque style Portuguese colonial architecture which dates back to the late 1600s. It’s full of churches, college students, and, as the name suggests, gold. Today, its interesting architecture and history makes it a tourist destination – though I noticed that most of these tourists were not foreign, like us, but rather Brazilians on holiday. I read somewhere that Ouro Preto is to Brazilians as DC or NYC is to Americans. 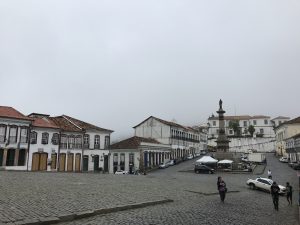 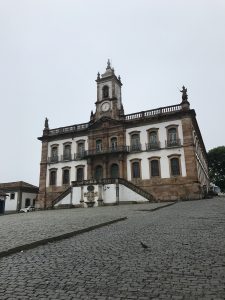 According to our tour guide, it’s foggy most mornings here.

The city is built upon an underground labyrinth: for a hundred years, slaves mined for gold below the streets. There are 2,000 mines in the area, and more than 400 within the city limits. Now closed to prevent infrastructure damage, some of these mines have been turned into tourist attractions.

We stayed in something called a república, a unique housing system at the Federal University of Ouro Preto. It’s reminiscent of the American frat system – several students living together in a themed house. There are hundreds of them around the city, all with fun names like República Vesuvius or República Cachaça. Ours was tucked away on a side street. We were greeted by an enthusiastic black lab with an odd habit of wiggling her butt and hopping straight up in the air. It was definitely like a college dorm; a student who greeted us scrambled to locate sheets and blankets. No towels or pillows, no hot water in the shower. But lots of beer and chocolate to be found. I appreciated having such an authentic place to stay, though my raincoat wasn’t the most comfy pillow. 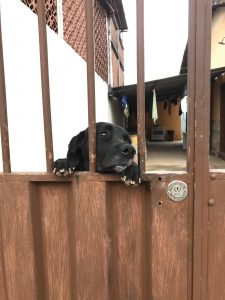 On Saturday, we woke up at 6 am, before most of the rest of the city had stirred. We eventually found a hotel buffet for breakfast. Riho, expert traveler, booked a tour guide for us while at the breakfast table and he arrived before I was done with my juice. Geraldo spoke some English with long stutters prefacing each sentence. But he was a master of Ouro Preto knowledge. He took us to two museums and four churches, and he was able to describe objects around every corner with great detail and no hesitation. I felt like I was traveling with Brazilian male Siri, able to define everything he passed. 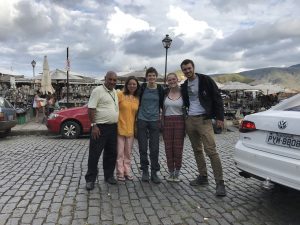 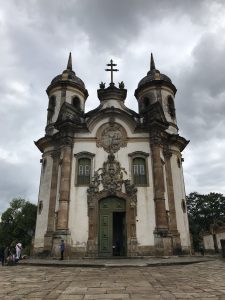 One of the many churches

I learned many interesting facts, but they were often half facts because of the language barrier – understanding some but not all of what Geraldo was explaining. One that took us a while to grasp was the name for the style of road, which was an old cobblestone. “What do you call this?” I asked him. After two or three explanations, he finally conveyed to us  that the road is called (roughly) “pé de menino mau” (foot of bad boy) because – bear with me – the rocks are shaped like the sweets that women leave in the open windows of shops along the streets, and which naughty boys will scoop their hands into for a taste. 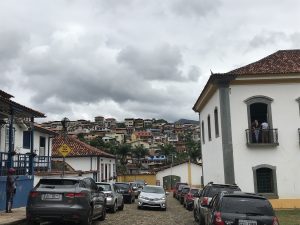 We took a tour of one of the gold mines, called Mina Jeje, after an African dialect spoken by the slaves working there. The slaves shipped from Africa had experience mining in their countries and so were highly qualified, so to speak, for the big job in Ouro Preto. This small Brazilian city exported 1/3 of the gold in the world between 1700 and 1800: over 650 tons, officially. It’s guessed that another 350 tons of gold were removed from the mines secretly as contraband – under fingernails and in hair. 950 tons in total over just 100 years.

Despite all the gold, Ouro Preto didn’t get rich off of it. Most of the minerals went overseas to Portugal. The Brazilian people managed to hide some gold in the backs of hollowed-out figurines used in churches. And the slaves used the gold they were able to steal from the mines to drape their own church in gold leaf.

The mine tour was neat – narrow tunnels, cool air, remnants of quartz stripes where the gold once collected – but we left in a somber mood. The history of the slaves in the mines is, unsurprisingly, dark and terrible. Rock frequently collapsed, trapping slaves inside or crushing them. If a body was unable to be removed because it was crushed or the person was trapped and died, they shut down the mine because of the smell and moved on to the next one. The dangerous conditions meant that the slaves usually only lived 10-12 years. And the narrow tunnels (only 80 centimeters wide) were hollowed out by children. The slaveowners wanted their slaves to be as short as possible, as this made them more fit for the work in the mines, and so they took brutal lengths to achieve this – castrating men who grew taller than their parents. This history can still be seen in the people in Minas Gerais today, who are shorter than average. The tour guide pointed at Geraldo as an example, who was probably only five feet tall. All this information was given to me through translation by Ronja or Alex, which I could tell was hard for them to repeat. It’s interesting to think about the ways in which people choose (or choose not to) repeat past tragedies, especially when people were the ones causing them. 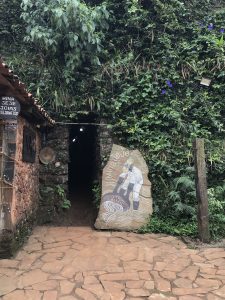 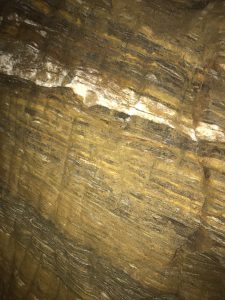 The white stripe is quartz – this is where gold used to gather.

Today the gold mines are shut down. But you can see their mark on the city, not only in the people, but in the churches, which absolutely drip with gold. There was such an excess that silver was three times as valuable as gold back then.

The churches also featured prominently Maria – Mary – even above figures of Jesus. Geraldo told us that Maria, also known as Nossa Senhora and “Carmo,” was the patron saint of the city. Beneath the cross was often featured three stars, the “Carmelites,” each representing a saint, whose names I did not catch. Jesus, despite being shadowed by his mum, was in no short supply either – we must have seen hundreds of Jesuses upon the cross. Hundreds upon hundreds. One thing that I found interesting was a repeated statue of Saint Anna (Santana, in Portuguese – Jesus’s grandmother) teaching her daughter Mary (Maria) to read the Old Testament. I later met a young woman at a soapstone market who made and sold soapstone souvenirs with her mom. When she heard my name, she laughed and told me, “My name is Maria!” We were Anna and Maria in the flesh! 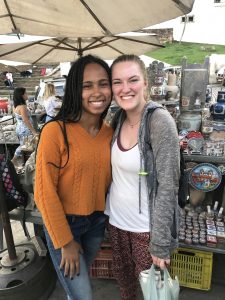 The Sao Francisco de Assisi church has been rated as one of the “seven most beautiful Portugal things” and had a trophy to prove it. And the Basilica de Nossa Senhora de Pilar featured 434 kilograms of gold, or nearly 1,000 pounds. 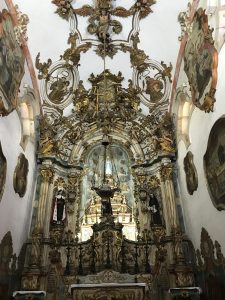 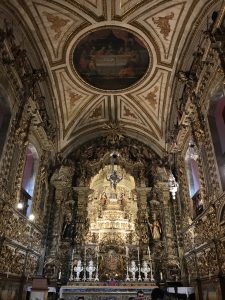 On Sunday, we said good bye to Riho, who headed out on the next leg of her journey. Ronja, Alex, and I hiked to a nearby state park called Itacolomi. We walked through a wealthy neighborhood on our way there, and it was fascinating to see the opulence of the houses. Also, they had some pretty ferocious guard dogs. 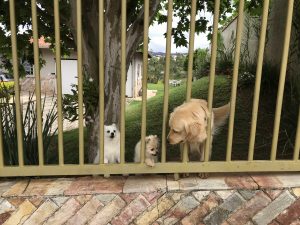 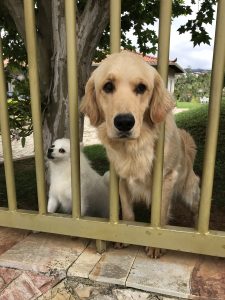 We walked 5 km up a mountain road to the visitor’s center, and then 5 km back. It was quite a long hike considering we didn’t even have time to do other trails. But we got high enough for some great views.

We left Ouro Preto by taxi around 1:30 pm and made it home in time to rest before dinner.

Now we’re already a day into my last week! I head home on Saturday. Stay tuned for an update or two more before I say good bye to this beautiful place. 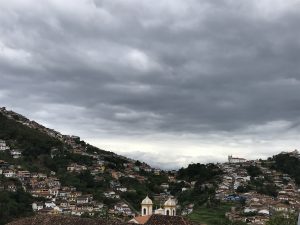