We don’t have to do work on the weekends (fim de semana), so volunteers use the time to hike, explore, or travel. One of the volunteers is in Rio de Janeiro for the weekend – “to hit the beaches,” she told me. The other three volunteers and I spent the weekend at Iracambi.

On Saturday at 9 am, we met Robin and his truck at the Centro for his customary tour of Iracambi for the new volunteers. We spent the next three hours driving all around Iracambi’s property (500 hectares – 200 hectares of eucalyptus crops, 200 hectares of native forest, and 100 hectares of pasture). 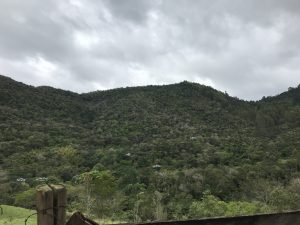 Some areas, like this one, show a good amount of rainforest. 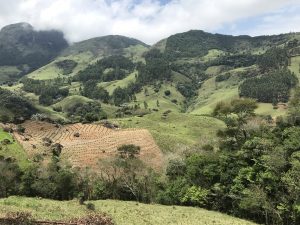 Others, like the one above, are largely pasture, coffee plantations, and fragmented forest. At times, I feel like I’m in the rolling hills of Ireland, not in the middle of a rainforest. 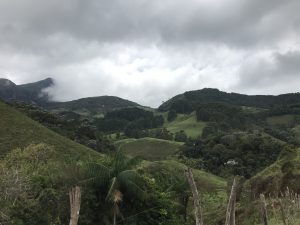 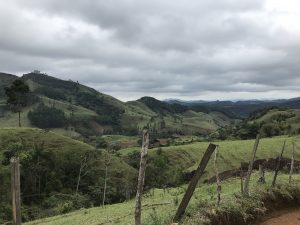 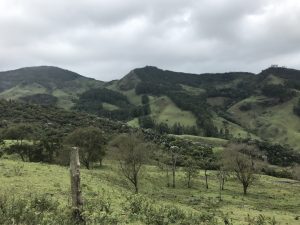 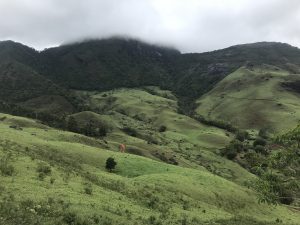 We stopped by a coffee plantation to look at some of the coffee plants. Coffee is the second biggest crop in Minas Gerais (after dairy cows) but it has caused a lot of problems. In fact, Robin thinks it’s responsible for “a very big part of the degradation of the rainforest.”

Because the area is so mountainous, they tend to be planted on slopes (as you can see below, right above Robin’s arm). The topsoil is washed away when there are no deep roots holding it together. This is an issue for a couple reasons – the soil washes down the river to Muriaé, where it’s deposited on the banks there; and also topsoil is the most fertile, so its loss is not sustainable for future crops.

When you ask farmers about this eroded topsoil, they shrug it off and guess they only lose 1 ton of soil/hectare/year. But in actuality, it’s 90 tons/hectare/year.

Apparently there is a plant that can be planted at the base of the coffee which helps prevent soil erosion. But farmers mistakenly think that this can negatively affect the coffee’s growth, and this has caused conflicts. 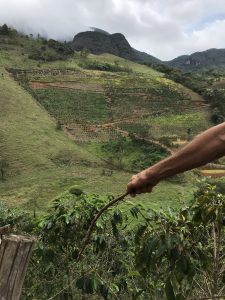 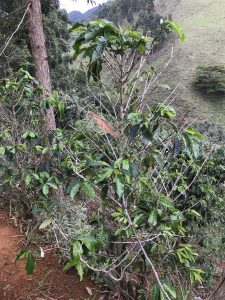 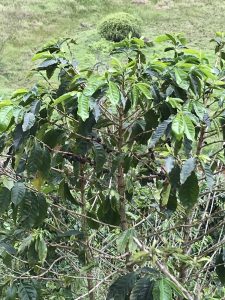 Above left you can see a coffee plant. The right picture shows some of the coffee fruits. 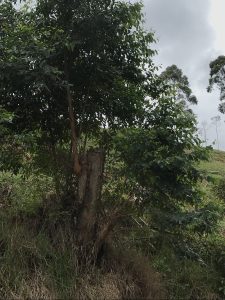 You can see 3 or 4 stumps on this eucalyptus tree – it has been cut down multiple times for its wood. Because it regrows after being cut, eucalyptus is a good crop for timber. 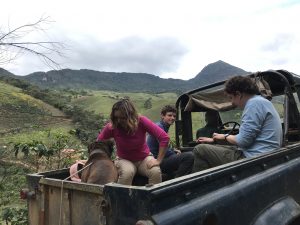 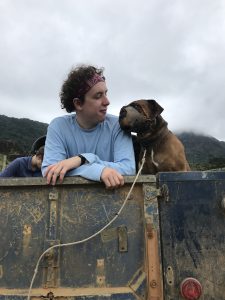 Forest fragmentation is a big issue in the Atlantic Rainforest. It changes the way that species in the rainforest interact. For instance, there’s this awesome tree called the Brazil nut tree that’s seeds can only be germinated if it passes through the digestive tract of a small rabbit-like creature called the agouti. There’s a law against cutting down Brazil nut trees, so many pastures will have a few random Brazil nut trees in them – but the agouti lives deep in the rainforest. It won’t run across a field for nuts. So the Brazil nuts aren’t germinated. 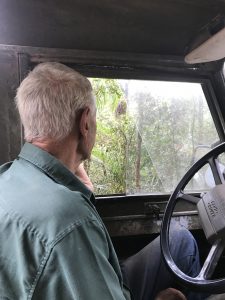 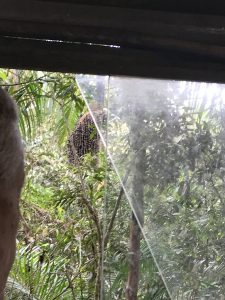 Above, Robin points out the fruit of the juçara palm. They are similar to the very popular health food, açaí, except even more nutritious. This is something Iracambi is interested in looking into, because currently juçara are frequently cut down for their palm hearts, which people eat. Harvesting the fruit doesn’t require cutting down the tree and can still make people their profit. 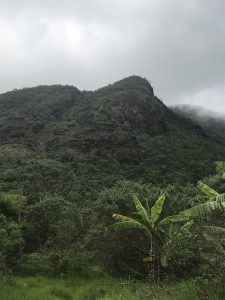 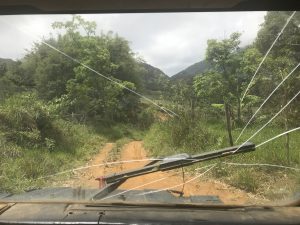 Saturday afternoon was slow and sleepy. I read, wrote, and napped for several hours in the hammock in the Centro by the open windows overlooking the mountains. We all went to bed early. My roommate Ronja and I watched Tangled in Portuguese (with Portuguese subtitles to help me out).

Breakfast is usually 8-9 am, but on Sunday, it’s pushed back to 9-10 am, which meant an exciting extra hour of sleep. Though I have to say, even for a non-morning person, the mornings here are lovely. Full of birdsong and whirring insects and huge green leaves and the stillness that comes with constant motion.

Shortly after breakfast, Nathan, Riho, Ronja, and I followed Deivid to a waterfall near Robin and Binka’s house, about 3 km along the road from the Centro. We got there around noon and took a dip in the cool water. Hercules, who works on Iracambi’s farm, was also there with his dog Sheva, an enthusiastic border collie who was fervently moving sticks from one place to another on the forest floor. Hercules and Deivid walked along a slackline across the pool. It began to thunder – loudly – so we got dressed and left.

We parted ways from Deivid and Hercules and walked another 10 minutes to Robin and Binka’s house. We reached their driveway just as the storm broke and the rain flooded down. 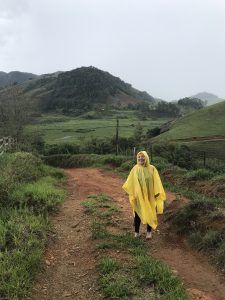 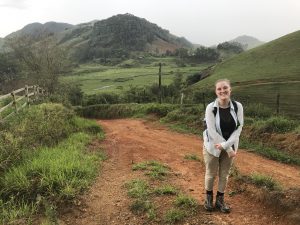 Robin and Binka have a beautiful house with high ceilings. It encircles a large courtyard with a tree and flowers. According to Binka, Robin designed the house himself without the help of an architect. It’s made out of compressed mud with cement pillars for support. And though it was somewhat makeshift, it has stood for 20 years now. 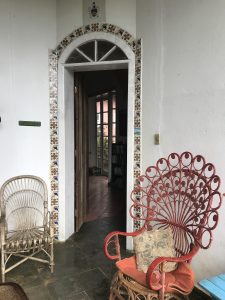 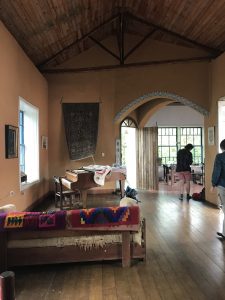 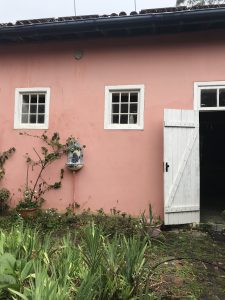 The color of the house is not typical of Brazil – it was inspired by the colorful houses in Mexico.

They have a huge library from floor to ceiling, full of books, and a concert piano in one corner. When Binka learned that Ronja’s parents used to study bats, the two of them went looking for bats in the house behind large tapestries on the wall (no luck). Robin lent me a book called “A History of the World in 10 1/2 Chapters” from the library. 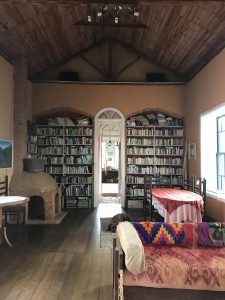 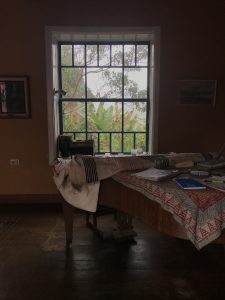 When it stopped raining, Binka walked with us to a hermitage nearby, where a woman named Carla lives. Carla studies medicinal plants, which is super cool and really useful. She also makes shampoos and soaps with plants from the forest and thinks they could be commercialized. Unfortunately Carla was currently in São Paulo, but we met a possible-monk-to-be Marco who was living at the hermitage. Eight or nine cows had escaped their pasture through a hole in the fence and were wandering around the hermitage and chapel, so we helped him herd them back through the fence. Thor barked through his muzzle at their heels. 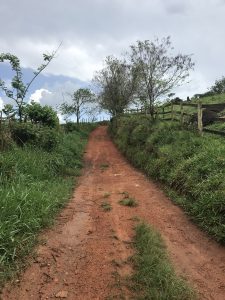 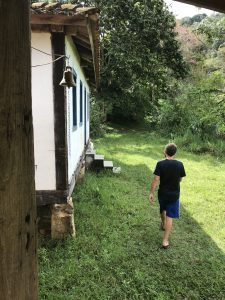 We got home around 3:30 and had a late lunch. I made some lemon-earl-grey tea and sat out on the deck. Thor sat in my lap as I read my new book – the first chapter was the story of the Ark from the perspective of a bug. Before long it was time for dinner. And soon after, time for bed.