Semente = the Portuguese word for seed.

The process of planting a tree starts with the seed.

On Thursday, I was assigned to collect inga seeds with another new volunteer from Japan, Riho.

At 9 am, after breakfast, we headed down to an inga tree near the entrance gate to Iracambi. We needed to collect as many inga seeds as possible today, since the seeds were towards the end of their season and Rogéria thought they would likely be rotten by the end of the week. Riho and I split up; she stayed by a tree close to the dining area and I walked a ways down the path, following a trail (carved by ants walking at night!) to a babbling stream with a wooden bridge across it. Across this bridge I found another inga tree, so I gathered bunches of seed pods and sat on the bridge with my feet dangling above the water, and I removed the seeds from the pods and put them in a bag. 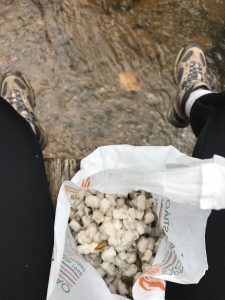 The inga seeds come in a long brown pod. When you crack it open, it’s fuzzy and white – I thought it was mold at first! But you can eat the fuzzy stuff, which is sweet. Inside, you’ll find a green seed. Unfortunately many of these seed pods had already gone rotten and the fuzz had turned a nasty brownish color dotted with worms, which I picked through to reach the seed. 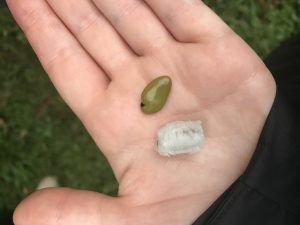 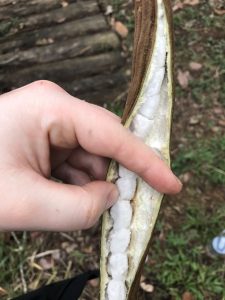 A good pod. I didn’t take any pictures of the gross ones !

After a while, Riho joined me with dozens of pods. Another volunteer from England, Nathan, stopped by for a bit to help. He just set up four camera traps to hopefully take photos of some ocelots – big cats – wandering around at night. So far he’s only caught an opossum. 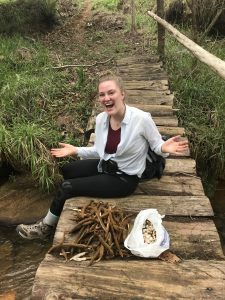 Around 11:30, we haul the seeds to the Centro and place them in a bucket of water to soak. A few hours later, after lunch, Riho and I set to work on removing the fuzzy outsides of the seeds. Many of the white parts have slid off the seeds thanks to soaking, but many were still trapped inside and we removed them by hand. We spent two hours on this, but we didn’t finish, and decided to take a break. 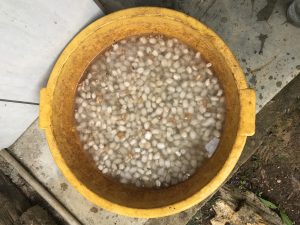 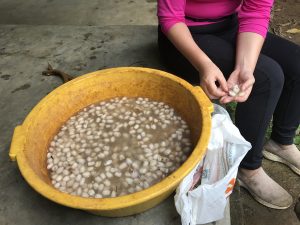 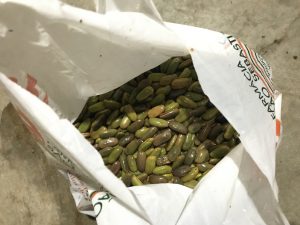 We went by one of the cabins and found a limão (lemon) tree, where we gathered a lemon and several leaves. Back at the Centro, we made a small pot of tea by boiling water and adding the ripped-up leaves, lemon juice, and Earl Grey tea bags that Riho brought with her. We drank it with what I think is called melado (brown sugar in a taffy-like form) that was made by a local entrepreneur and farmer and which I bought the day before for R$4 (or US$1). 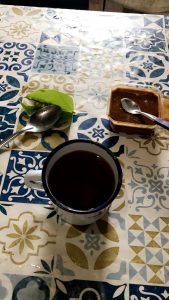 Friday was all about sementes too. Riho, Ronja (a volunteer from California), and I met with Deivid at 9 am in a space they refer to as the lab. Deivid doesn’t speak much English, but luckily Ronja has a pretty good handle on Portuguese, so she helped translate. I worked hard to try to put my three semesters of college Portuguese to use, but I swear the language part of my brain is broken. Still, I was able to pick up a lot of what Deivid said, which was exciting. 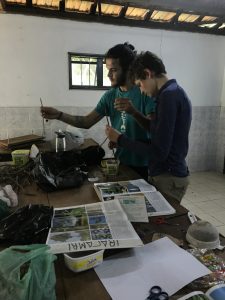 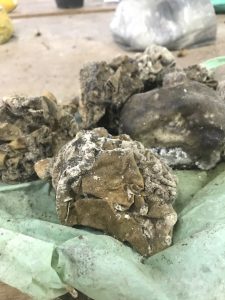 L – Ronja and Deivid work on removing seeds from their pods. R – These are called fruta-de-lobo, or wolf fruit, because Brazilian wolves eat them (and actually will get sick if they don’t eat them).

From 9 am – 1:30 pm, we identified seeds. He had dozens of bags of different types of seeds on the table. He explained to us that in order for seeds to germinate, they need to be planted in a specific soil (solo) and amount of sunlight (sol). The soil could be compost, clay, or sand, or various combinations of these, and the sunlight could be full, partly shaded, or shaded.

Luckily, Deivid knew most of the common names for the seeds, so he got us started. Then we used big books on Brazilian trees to identify the seed – there are many different species that sometimes have the same common name – and write a plaque to put in the nursery with information about the desirable soil and sun. These plaques used to be written on aluminum – reused beer cans. But, Deivid explained, aluminum is valuable and actually mining is a big issue in the state of Minas Gerais (which translates to “general mines”). So he has switched to using the bottom of margarine containers. 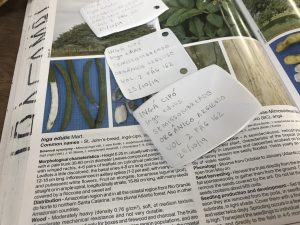 “I love seeds,” Deivid told me in English at one point.

Planting season starts soon, once the rainy season comes in November. We’ll be planting these seeds in the nursery next week, and perhaps even go to farms nearby to plant some saplings.

Friday afternoon, one of the founders of Iracambi, Binka, came to visit. Binka and Robin are married and both extraordinary people with long and fascinating life stories – Binka used to be a concert pianist and now she’s a writer and investigative journalist; Robin has been, by my count, about a million different things, including work at the World Bank, coffee farmer, tea planter, and his background, of course, is in law.

Binka talked with me and Riho for a few hours, giving us a history of the NGO. As she talked, her dog Thor – a big boxer with a muzzle – ran around with the lone guinea fowl, Highlander, and they took turns chasing each other. 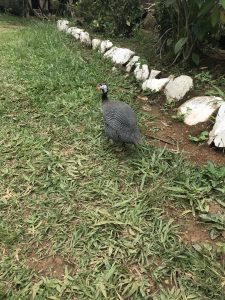 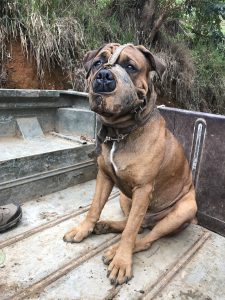 Then last night, the volunteers, Deivid, and Arielle, the Forests 4 Water coordinator, played cards during a huge thunderstorm. The lightning (relâmpago) flickered outside non-stop. 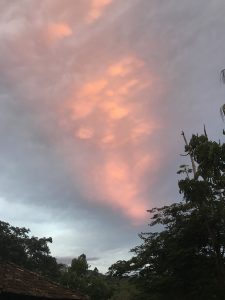