After two flights, a taxi, two buses, and a taxi, I have arrived!

To say I was nervous about going on this trip is an understatement. Thinking about embarking made my stomach hurt with anxiety. As a result, I didn’t buy the flight tickets until two weeks ago, and I didn’t tell many people about my plans.

I’ve learned to mostly discount these pre-trip jitters, though it’s taken some practice to distinguish “normal nerves” dread and “actually unprepared/dangerous situation” dread. Emotions often help us inform decision-making (you know, that “gut feeling”), but dread feels just like dread, so it’s not a great cue for what action to take. For instance, I was ready to jump out of the car when my dad drove me to college. I was literally full fight-or-flight mode. While my friends excitedly prepare for studying abroad in Denmark, I was too nervous to even think about it. The dread overrides the excitement of anticipation, even when I know that the coming experience will in all likelihood be wonderful. Indeed, college brought new friends and perspectives, and Denmark brought me into a new family. So, I’ve learned to be smart and follow my interests while still fighting through the contradictory dread – and I trusted that I was indeed ready to travel solo to South America for a few weeks, even though my gut told me I wasn’t.

I flew first to Miami, landing at 10:30 pm and sprinting to my 10:50 pm connection to Rio de Janeiro. I landed at 9 am in Brazil, and then it was a full day of travel to get to the rainforest. I was most concerned about this part – would it be dangerous traveling alone as a woman? What if I got lost and couldn’t find anyone who spoke English? What if I missed all my buses? The what ifs, as usual, proved pointless. It was a long day, but it went quite smoothly, all things considered. In the taxi from the Rio airport to the Terminal Rodoviário Novo Horizonte, where I would catch my bus, the taxi driver and I exchanged conversation in Portuguese. I was impressed by the random hills jutting out of the city like elbows. On top of one sat a lone church. On another, a magnificent orange castle. My driver told me it was a center for medical research. In between the lanes of the busy highway, men sold food from bags. My driver stopped in traffic and bought me a pão de queijo – cheesy bread – to try.

Five hour bus drive to Muriaé, and then an hour long bus to Rosário da Limeira, where Iracambi is located. During that bus ride, the sky darkened and I had trouble staying awake. The hills were shrouded in darkness and dotted with hundreds of fireflies. I arrived at Rosário da Limeira and found a taxi driver, and I had already gotten in the car before I realized that I forgot to tell him where I was going. “Iracambi Centro,” I told him. “I know,” he responded. Apparently the taxi drivers in Limeira can always tell who the Iracambi volunteers are. 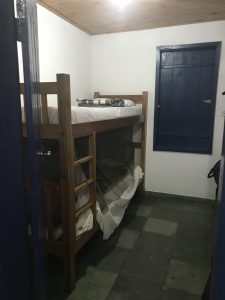 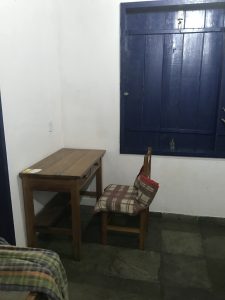 My abode for the next few weeks.

When I arrived, it was only 7:30 pm, but it was dark as midnight, with no streetlights or bright lights of any sorts. I ate the leftover dinner they had saved me – rice and beans – with Rogéria, the volunteer coordinator, to a chorus of very loud frogs. 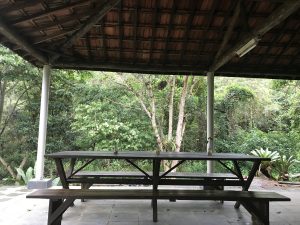 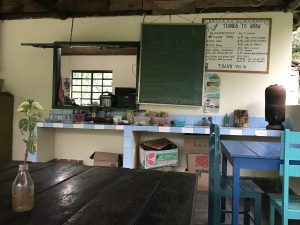 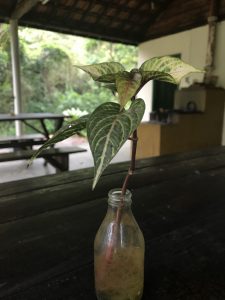 The dining area – a restaurant run by Larissa.

Today, Rogéria, the forest nursery coordinator Deivid,  two other volunteers, and I took an hour-long drive to an ecotourism company, recently started by a man in the back of his father’s farm. He wants to offer kayaking, biking, and ATV rides to tourists (and volunteers at Iracambi) to help bring money into the community. We spent some time at his place and tried pimenta (pepper jelly), brown sugar syrup, and cevada, which is made from grain and tastes like sweetened iced coffee. 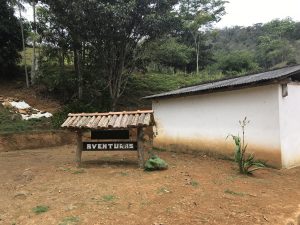 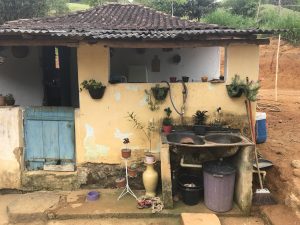 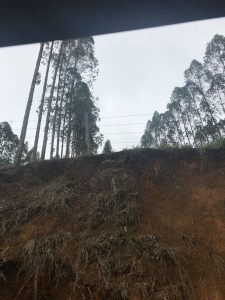 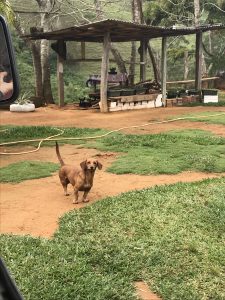 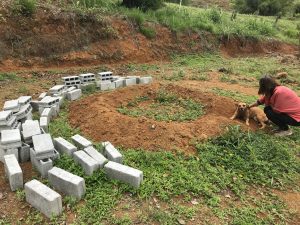 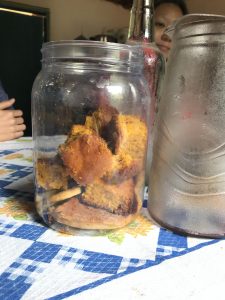 On the left, a type of closed-system garden called a mandala, usually with chicken or fish in the middle and crops around the outside. On the right, carrot cake. 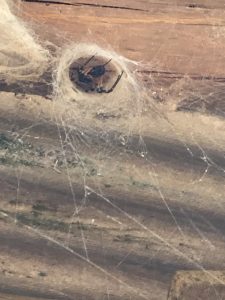 In the afternoon, Rogéria took me and the other new volunteer Riho on a hiking trail around the facility, where she showed us all types of trees and medicinal plants. I was taking furious notes to try to remember them all. It amazes me how supernatural nature can be sometimes – like stuff of the movies. I’ve put in some pictures below: 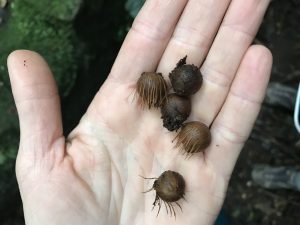 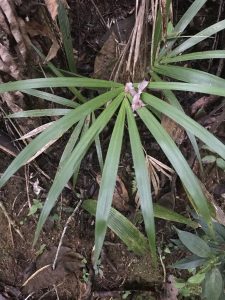 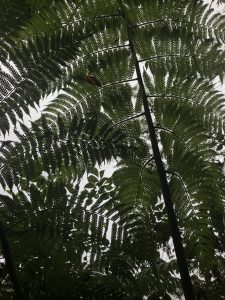 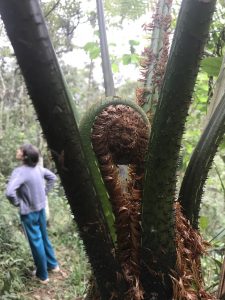 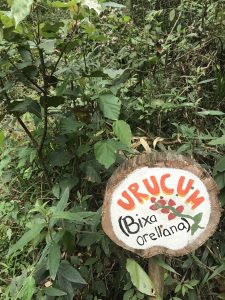 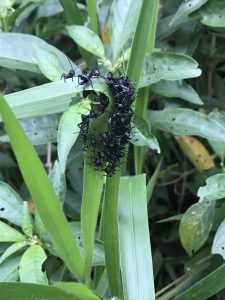 These baby grasshoppers gather together in a clump, possibly for safety. 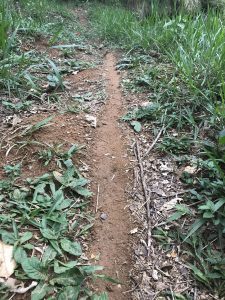 This is a trail made by ANTS who clear the trail at night.

Tomorrow, Riho and I are in charge of collecting inga seeds so that David can plant them in the nursery. Now it’s off to sleep. Lots of seeds to be collected tomorrow.

The inga seeds come in a pod. When you crack it open, it’s fuzzy and white – I thought it was mold at first! But the fuzzy stuff is sweet, and if you suck on it, you’ll find a green seed inside.

It’s funny how much of dread comes from the unknowing. Having no idea of what’s coming ahead, unable to visualize where you’ll be living or imagine what you’ll be doing or know who you’ll be sharing your space with. But unknowing can be fixed by simply experiencing, and then, consequently, knowing. 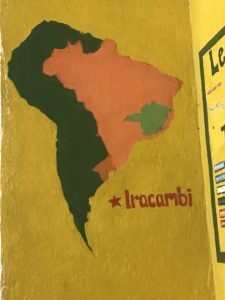 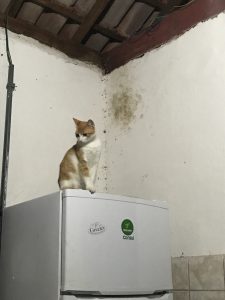