The summer before my freshman year of college. I’m working as waitstaff for a catering company in my hometown. Tonight’s wedding is at Turner Hill, a brick mansion overlooking a golf course. It’s crowded and hot; I’m wearing a full black tuxedo and sweating thoroughly. I’m also eyeing an attractive, curly-haired man working at the bar. As I walk my empty coconut shrimp tray back to the kitchen, he playfully puts his hands on my shoulders to guide me through the crowds of guests. My heart races. I give him what I hope is a flirtatious smile. Later, in the kitchen, we talk for the first time. I learn his name and he learns mine. “Are you in college?” he wants to know. “Going soon,” I say. “Where?” he asks.

I avert my eyes and mumble: “Harvard.” Now he wants to know my GPA. I share it shyly. He chuckles and says something dismissive about his own school performance. I shrug. I care more about his perfectly-gelled hair in this moment. But something has burst, and an awkward silence follows.

In the years since that night, my Harvard friends and I have had many conversations about that question.

“Where do you go to college?”

Attending Harvard comes with its bundle of stereotypes. Because the college question is customary and innocuous, it appears quickly in conversations with both acquaintances and strangers.  “Where do you go to school?” follows closely behind the introductory “What’s your name?” So it happens that this particular factoid – where we go to school – tends to inform someone’s characterization of me and other Harvard students more quickly than types of information that aren’t shared as quickly, such as our hobbies or whether we prefer cats or dogs. Of course, there are worse things in the world than being judged by strangers or mischaracterized by new friends. Still, such a simple answer has colored hundreds of interactions that I’ve had in the past four and a half years.

When I eventually mentioned these misgivings to my roommates, they related to the complexity of the Harvard association. We discussed our feelings about the question quietly in our common room. There’s a fear that comes with even holding the conversation – that it might come off as complaining when we’re so lucky to attend to an incredible school.

We brainstormed several answers that might soften the inevitable thud of “I go to Harvard.” Most of them we’ve rejected: “Harvard College” or “Harvard University” feels too descriptive. The timid “Harvard, in Cambridge” – my suggestion, mostly because those extra words fill the awkward silence following the reveal – has also been shut down. Patronizing to include location. One friend suggest keeping it vague with “I go to school in Boston.” Of course, the obvious answer is simply stating confidently that we attend Harvard as if it’s any other college. Because it is just another college.

But also, it’s not. Beyond its resources, endowment, famous alums, and other various reasons for acclaim, it’s exactly that: acclaimed. It’s challenging to meet someone who hasn’t heard of Harvard. In fact, it’s one of the only schools that most of the world knows. A friend from a rural part of China told me that when he told his family that he got into Harvard, they weren’t impressed – because it was the only college they knew existed. Ironic, in that sense.

But in most cases, people know not only Harvard but the reputation that surrounds it – and so also the preconceptions about its students. Once someone knows you go to Harvard, they can do some easy math. There’s power in this ability to assume. For someone to go to a school like Harvard, it’s assumed that they must have some combination of specific skills, personality, behavior, and background: extraordinary intelligence; remarkable achievement in a particular field; Type A personality; the prioritization of school over all else, at the expense of relationships and socialization (aka, nerdy or uncool); they have a legacy or relationship with a donor; privilege. These ideas surrounding the stereotypical Harvard student precede the actual students. They’re sometimes true, and often not. But they inform the mythology that is Harvard as a mysterious haven of elite genius.

Most of my friends cringe at one preconception in particular: that we might be pretentious. So during various iterations of this conversation, in the dining hall or on the rug in our common room, we debate the way to reveal our college without shifting a conversation – without suggesting we’re something we’re not. It’s sensitive because, as my friend points out, dodging the question by saying something like “I go to school in Boston” also has the wrong feeling to it. It suggests a shame, and that shame in and of itself is privileged; alternatively, it could be read as boastful, like you’re baiting the person to keep prying until the grand reveal. The ideal answer would allow the Harvard student to be proud without being prideful, and to be humble without being ashamed.

Over the past four and a half years, I face that relentless question every day. “So, young lady, where do you go to college?” I’ve received a range of reactions. These include:

For the first couple years of college, after answering that question, I imagined the other implicit response in my head: “What is so special about you that got you into Harvard?” But this was the same question I asked myself while walking to class. This was the question that most of my classmates asked themselves, too. Maybe the reason my friends and I bristle at admitting we went to Harvard is because it reminds us of that question that we can’t answer ourselves.

What made us worthy of attending a school as big and mythic as Harvard?

Of course, there are entitled students at Harvard. But many of the people I interacted with do in fact experience imposter syndrome – feeling like they didn’t deserve to be there. I remind myself what someone once told me, which is that getting into Harvard is a crapshoot. You check some of Harvard’s boxes – namely, grades, positive recommendations, and evidence of a few interesting passions – and then it’s just a crapshoot based on what they need (say, they haven’t admitted a clarinetist in a long time) and the mood that the judges are in the day they look at your file. I read an NPR article that described the behind-the-scenes of a private school admissions committee meeting. During the meeting, a virtually perfect candidate – valedictorian, did pediatrics research, volunteered – didn’t get a single vote from the judges, who explain (and this I do find pretentious) that the students they don’t admit are “just missing that je ne sais quoi”. (Did you really have to say that in French?)

After much reflection, I’ve decided that the implicit “What got you into Harvard?” isn’t worth much time. The more important question to me is “What did you do with your time at Harvard?” In other words, what did you learn? What did you see and hear? 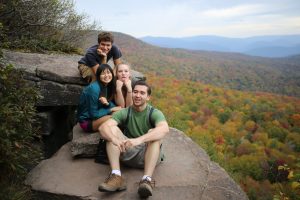 I would have an answer to that question. I would say something like: “I went to Harvard. My freshmen year next door neighbor was Sean Astin’s daughter, but my senior year next door neighbor was Johnathan Clark, and he loves birds. My freshman year, I met more people and felt more lonely than I had in my entire life. In my sophomore year, I helped start planning coffeehouses, where people who had never performed in front of an audience would get on stage and sing original songs. Once Toni Morrison came to speak and she told us that her greatest joy in life is sex. (“Was I supposed to say writing?”) I became part of a community of kids who had a parent with cancer. Then there was junior fall, when my roommates struggled with mental health. When we started a happiness wall covered in sticky notes with reminders of what made us happy. There were also, of course, the mice in our couch senior year. Once Liam and I ran through a snowstorm in t-shirts to buy mozzarella sticks. Melinda slipped notes under my door when I was having a hard day. And at 6 am on graduation day, the dean of Harvard College wept while giving a farewell speech to a few dozen seniors in our house.”

And that it was all these little things, and the big ones. I can’t separate college experience from Harvard experience; I can’t know how different mine was from people at other colleges. I feel blessed to be a Harvard student – but even more blessed to be a college student.